Due to limited vendor inventory related to COVID-19, maximum order quantity per item may be limited based on product. Qty in cart will be auto-updated to reflect COVID-19 item restrictions. This temporary measure ensures that our products can be more equally distributed among our valued customers. 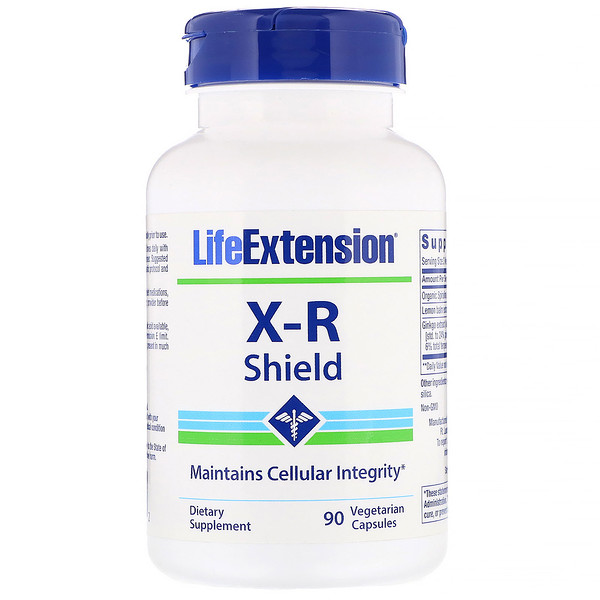 By Life Extension
2 Reviews | Write a Review
In Stock

#216 in Herbal Formulas >
Frequently Purchased Together

This ginkgo extract contains the lowest level of ginkgolic acid available, even lower than the stringent 5 ppm German commission E limit. Ginkgolic acid is an allergen for some people and is present in much higher levels in lower quality products.

X-R Shield is an all-natural, oral formula that supports cellular integrity and DNA health. Ionizing radiation emits sufficient energy to disturb the very atoms we're made of, producing ions known as free radicals. Free radicals have the potential to affect living tissue — including your DNA. But the specific nutrients in X-R Shield can help maintain and support cellular integrity and DNA health, especially if you're going to be exposed to sources of ionizing radiation!

Benefits at a Glance:

From solar ultraviolet to cosmic radiation to X-rays from medical diagnostic imaging procedures like CT scans, ionizing radiation consists of waves and particles of sufficient energy to disturb atoms, “knocking out” electrons to create ions.

Also known as free radicals, these ions have the potential to interact with living tissues and disturb cell structures, including fragile DNA.

A review of the published scientific literature reveals that certain nutrients may help support and nourish the body's cellular integrity in the context of ionizing radiation.

Take three (3) capsules one to three times daily with food, or as recommended by a healthcare practitioner.

Suggested duration of use: Start at least 5 days prior to a diagnostic protocol and continue taking until the bottle is complete.

Caution: If you are taking anti-coagulant or anti-platelet medications, or have a bleeding disorder, consult your healthcare provider before taking this product.